“Land Body Scape” defines space (stage) by means of universal dance and music language which is enhanced by film and light images. The content is set on a complex interplay of sovereign characters, telling stories through their specific dancing. The plot is accompanied by spoken text, coming from poetry of contemporary authors and filmic devices in the form of short narratives by the British Italian co-production of Duncan Ward and Gabriella Cardazzo.

The seemingly morbid brick wall stands on the left, the thick columns are placed in the back and before the eyes of the audience. To develop his “Raumstück Land Body Scape” in the right way, choreographer Sebastian Prantl twisted the stage and therefore turned the stand of the Odeon-Theatre by 90 degrees: The dance parquet expanding itself almost endlessly in width. At the beginning nine dancers are sitting relaxed, maybe they are even sleeping at a table which is placed in the background. Slowly they come to life, developing movement and contact – to one another, to music, to space. By solo attempt, by two and sometimes also in a tight group, the dancers conquer their place with intense effort. They swirl, spin, stride, communicating in an acrobatic manner, citing alien rituals, bowing in perfect style before classical ballet […]. Everything is possible. Everything is exciting, thrilling and allows any kind of deviation of the mind. With every turn of the kaleidoscope a new image appears, to moulder shortly after in order that the individual parts can be arranged anew. Sometimes Cecilia Li comes to the piano, becalming with gently sounds the turbulences on stage, suddenly electronics and dancers assault the space again. The scene consorts with words, poems in English, Italian, French, spoken, whispered, declaimed, and incomprehensible. Those who are curious can glean the poems of Bachmann-translator Peter Filkins, Michel Houellebecq and Stefano Dadda in the program. Twitters and flicks, sighs and screams are also part of the performance which rightfully bears the name “Ein Raumstück für Tanz und Musik”. The glorious light display of Erich Heyduck has great part in the synthesis of the art. Ghostly grey shadows straying above walls and columns. Coloured spots appear like medieval window glass, breaking itself in the black-and-white decoration tapestry… There was dance. And this is the highest praise that can be awarded.”
[Ditta Rudle, www.tanz.at] 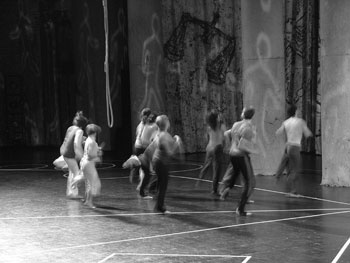 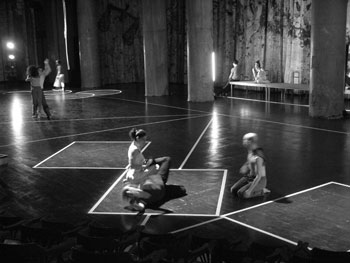 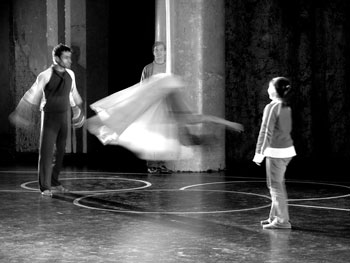