The authors work (choreography/music) is based on a complex analysis which connects musical material and choreographic structures with the specifics of spatial art within a contemporary theatrical composition – both for the stage as well as for open architecture (as in the overall framework of the former Jesuit Theatre). The musical material – the intention of the individual compositions – remains abstract yet related to the musical score. By means of subtle theatrical metaphors, the dramaturgy is woven with biographical material and thus a new terrain is explored with regard to content.

Itinerario Divertimento: Space Scape
After five years of (re)construction, a new additional headquarters for the Academy of Science was presented to the public, opening in autumn 2006. The premise was a new concept-combining research, representation and documentation, at crossroads with the arts.

The historical Jesuit university building complex has been completely architecturally revised in an extraordinary effort by the Austrian architect Rudolf Prohazka. It describes a choreographic master plan of functionality and sophistication. It calls for an adequate yet sensual blend of scientific and “theatrical” activities.

Itinerario Divertimento: dance scape
A large, white, multi-functional venue at the top level of the building compound (“alte Aula”) with a precious historic fresco on its ceiling – reminiscent of the religious contract of the Jesuit Theatre – proscribing a multi-layered interface for choreographic investigation.

The venue has been equipped with a new architectural unit: a dominant revolving metal wall (20m x 7m x 0.3m) which divides the full width of the space at any point along its maximum length (40m) and functions as a radical division frame – scanning along the fragile, religious fresco from beneath, fragmenting and foregrounding its content.

[Performed in the context of the symposium: What Is European? November 2006 and at IETM convention/festival Beijing/Shanghai Oct. 2006)] 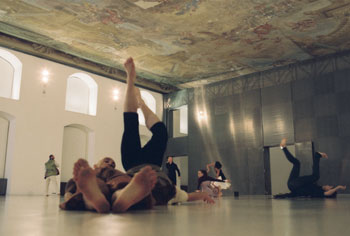 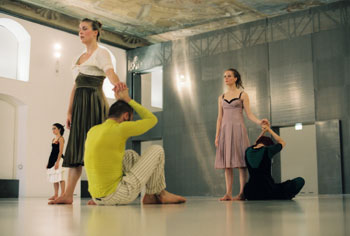 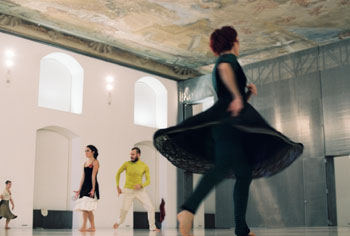