In “Itinerario Divertimento” the “twin composition”: Fantasy in C minor KV 475 and the Sonata in C minor KV 457 by Wolfgang Amadeus Mozart provide theme and dramaturgic grid. The choreographic opus was originally staged in a spacious historical venue – the former Jesuit Theatre of Vienna – in the context of the Mozart jubilee in 2006.

Now the stage version is a result of the experiences from the space/music scores of the impressive historical venue and underlines the interplay of characters in a differentiated fashion quoting from classical and contemporary cultural cipher. The individual approach of each dancer’s vocabulary is an important device in the overall choreographic imagery. Concrete tasks – analysing the stage space and connecting it to the music scores – require a conceptual standpoint and decision-making from the protagonists. This young and vivid dance ensemble featuring protagonists of various cultural backgrounds and ages produces a poetic dance vocabulary within the framework of Cecilia Li’s live piano performance on stage.

The duality principle (Fantasy – Sonata / statement – variation) is being celebrated in fast changing double (triple) modules with regard to dance and sound scape. Cecilia Li’s profound dramaturgic knowledge calls for spontaneous changes in the line-up of solo piano pieces and orchestral playback – including excerpts from other compositional oeuvres (Erik Satie, Joseph Matthias Hauer, John Cage and Giacinto Scelsi) within the approx. 70 minutes performance. The protagonists’ virtuosity is being challenged by reacting to the changing score – deconstructing and re-defining it within a verbal and choreographic structure.

A numerical symbolism of Mozart’s composition order: KV 457 and KV 475 may resemble a mathematical code for theme and variation in the choreographic interface of “Itinerario Divertimento”.

Some narrative connection may be read into the dramaturgy with regard to Mozart’s biography: mother, sister, wife, child…

Itinerario Divertimento at the Lemesos dance festival was the best I have seen from an Austrian Company. Itinerario Divertimento is full of dance, movement, music, ideas, agility, tableaux vivants, and cryptic references, which we are still thinking about and trying to de-code. We specifically did not ask for explanations, because it is fun trying to guess the meanings of some of the scenes […] It makes such a difference having live music in a production, especially when played with such skill and sensitivity. Bravo to all of you for a delightful evening of entertainment, I am sure Itinerario Divertimento will be a great success everywhere.”
[Christakis Christofides, Honorary Consul]

[„Itinerario Divertimento“ at the European Dance Festival at Rialto Theatre, Cyprus, May 2008] 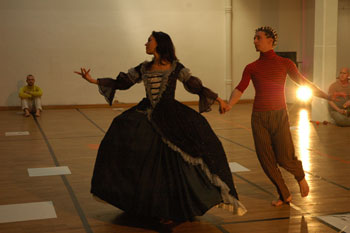 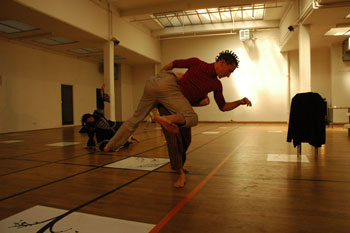 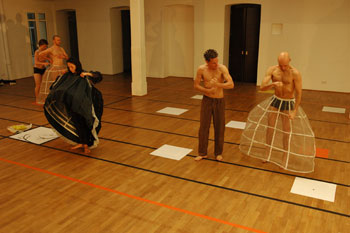