A man in middle age is measuring his space using long bamboo sticks and is decorating it with coloured grains while the world outside (on video) passes him by. […] His bamboo stick becomes a magic wand, the touch of which turns water magically into steam and makes a drop of water change shape – small, unexciting changes […]. In “Kairós 07 in[ter]vention” Sebastian Prantl has composed the essence of his long, systematically pursued artistic investigation into a real time composition lasting just under one hour. The spectator, in his space, feels like he is on an island where time has stopped. The proximity to Far Eastern culture is tangible. With his ability to animate spaces, Prantl sparks off a wide range of emotions using minimal means. The atmosphere is transformed from gravely oppressive to cheerfully serene even as far as ironically amusing, it is hypnotic and captious – you cannot escape the magician. That is also due to the carefully composed musical direction of items with a common theme, by the New York composer David Lang, by Ligeti and by Philip Glass some on tape, some played wonderfully musically on the piano by Cecilia Li. Nowadays, Prantl’s name is synonymous with authentic performances, in which nothing is acted or played. In this connection, the simple evening program that deals briefly and appropriately with the individual parts of the evening should be mentioned– it keeps its promise: Kairós – the quality of the moment.”
[E. Wolf Perez, Tanz.at, 7.12.07]

Short compositions of different styles, played with virtuosity by Cecilia Li, are implemented by Sebastian Prantl in dance and expression – he also uses pantomime. Requisites like white cloths and red feathers enrich the stage design as well as entirely unpoetic radiographs. Stones must not be missing. Prantl involves the audience effectively – an invitation to the world of art, an invitation to dialog.”
[Birgit Knape, Mainzer Allgemeine Zeitung, 7.10.2008] 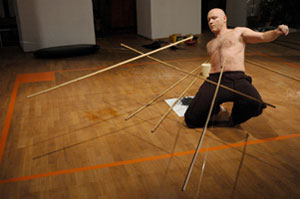 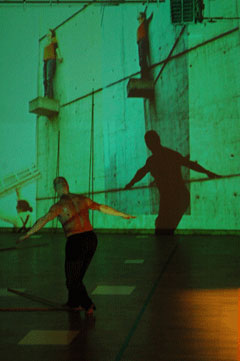 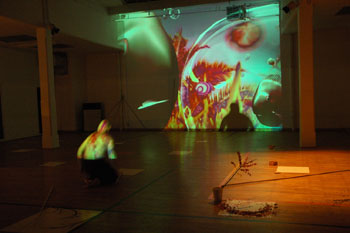