MOTION PHONOTOP, movement and sound, have been the main topic of research, labs and perfomances at Tanz Atelier Wien since the beginning of 2010. “Fusznoten …” was the season’s highlight.

The production was shown at the former Jesuit theatre in the Aula der Wissenschaften right in the middle of Vienna. Since it was restored by the architect Rudolf Prohazka in 2006, it is used as a venue for artistic encounters and the transfer of knowledge. The modern and yet at the same time historical ambience is the ideal background for the space-text-choreography created by Sebastian Prantl.

At the premiere on October 15th, Friederike Mayröcker read personally. Her charismatic presence in the act of reading was the starting point for a unique choreographic reading of her work by Sebastian Prantl and his dancers. In the course of the performance the five protagonists, each of them from a different cultural context, established relationships between themselves, textual fragments, movement and sound. The pianist Cecilia Li played pieces by Debussy, Satie and Scriabin which were complemented by further music material, e.g. by American composer David Lang.

The performance was a charity event in favour of a school for hearing-impaired children in Vienna (Bundesinstitut für Gehörlosenbildung). The proceeds are used to support dance, movement and literature projects for the students.

„Prantl […] used the author’s texts as a source of inspiration to work just as associatively and sensitively with his five dancers as Mayröcker does with language. The author read in a completely dark room, just a reading lamp illuminated her face. Even only the poetry of the “beggar of words”, who read of “language rotating in her head”, would have provided a fabulous evening. But Mayröcker’s presence was an honourable bonus (following performances will work with recordings of her reading) after which a wall in the background opens up. Light floods the room through three doors. Another wall disappears behind the audience, spotlights light up. The dancers conquer the stage with smooth and vibrant movements. Again and again they surprise us with postures, lifts and stretches taken from classical ballet. In the constant flow of moving bodies they display a wide range of feelings. The sweeping rotations, bends and flexions, the encounters and partings are accompanied by Cecilia Li at the piano […]. Just as readers and listeners are deeply affected by the resonance of Mayröcker’s texts, the dancers are deeply affected by the piano’s sound: they dive from the light into the dark and disappear from time to time – just to appear on stage again in the next moment.” (Mag. Ditta Rudle, tanz.at) 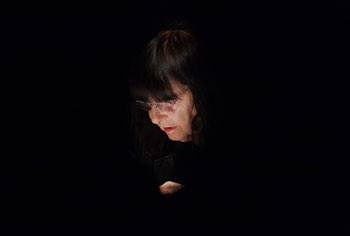 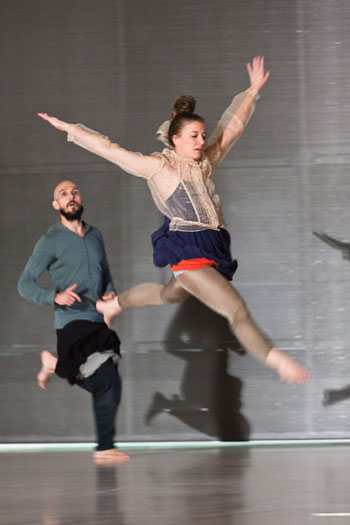 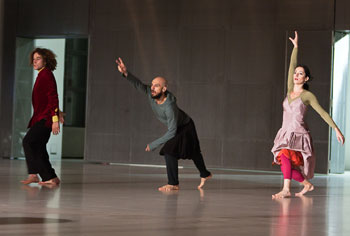 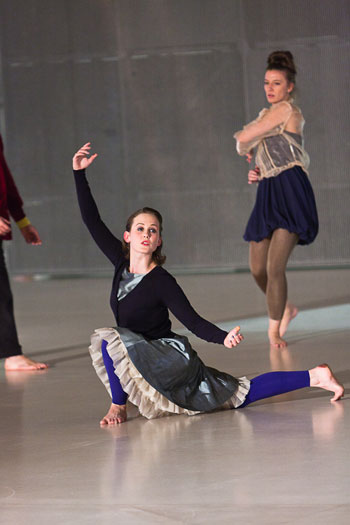